The project at Piccotts End is largely preventive conservation, in the form of condition monitoring of the scheme of late 15th or early 16th century paintings following historic water damage which had resulted in flaking and delamination of the paint layers.

This beautiful scheme of painting was discovered in 1953 under layers of wallpaper, limewash, and a linen covering in 1953 by the owner of the cottages at the time. The scheme consists of a series of seven panels arranged in two tiers on the north wall of the cottage and show the Baptism of Christ, Christ in Majesty, St Catherine of Alexandria, a Pieta, St Clement, St Peter, and St Margaret – all portrayed against a backdrop of rich foliate design of scroll work and flowers.  The scheme is executed on a plaster and timber internal wall in a typical palette of the period, using a water-based medium.

Flaking was first observed in a conservation condition report some years ago, since which time external maintenance work has been undertaken on the building to address the source of the water ingress which resulted in the flaking.  Two conservation campaigns followed this first report to map the flaking and undertake remedial work to fix it where observed.  I became involved in the project after this first phase of work, and now have the watching brief on the paintings which consists of regular visits to monitor the surface of the paintings, map any new observed flaking and readhere flakes when they are observed.  These areas of new flaking are becoming fewer and fewer as the wall dries out following the maintenance work on the building and the environmental conditions, and the paintings, stabilise. 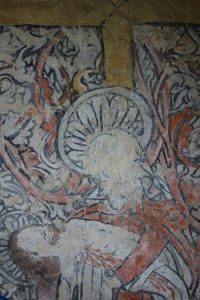 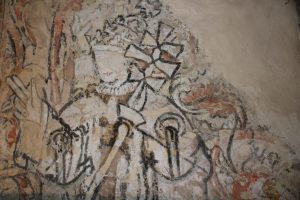 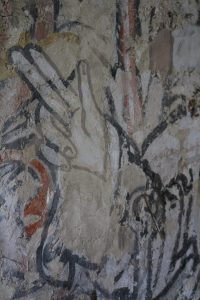 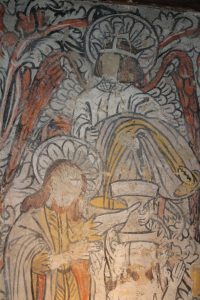 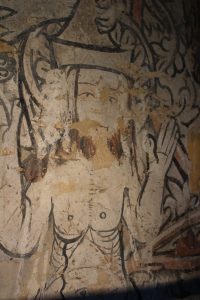 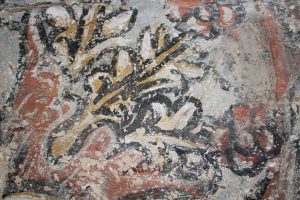 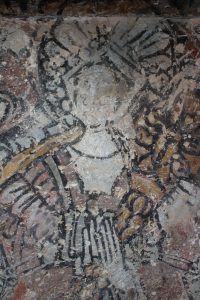 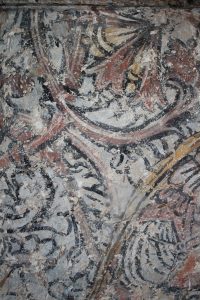