I undertook two phases of work at a grade II* listed 17th century Cotswold manor house in spring and summer 2022, following a conservation assessment of the wall paintings in the western of the manor house’s two gatehouses in autumn 2021. 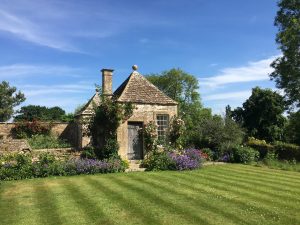 The gatehouse’s painted decoration comprised two, very fragmentary, paintings (a landscape and seascape) situated over the chimney breast of the fireplace, and a scheme of black frames, over a grey ground, which covered the other walls of the building. It appears that these frames were laid out for more painted scenes, which were never executed. 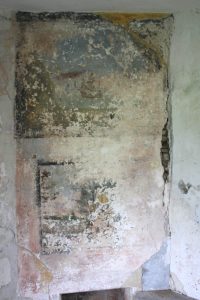 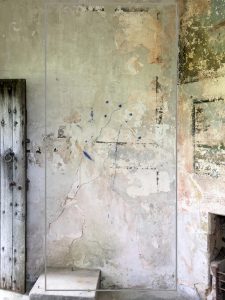 2 & 3 The chimney breast paintings, left, right – highlighted -is the representative area of the frames scheme which was treated

The manor house gatehouses have an interesting history; they are believed to have had separate, but related uses, with the western one used for picnics, and the eastern one for the preparation of the picnics. The walls of the eastern house have multiple layers of graffiti texts, which appear to be mainly names and dates, and possibly a counting system, but one of which is decipherable as a ‘bushel of cheese’. A similar use of two gatehouses for picnics and preparation can be found at the 17th century Hidecote Manor House in Gloucestershire.

According to local legend, the chimney breast paintings were executed by Napoleonic prisoners of war, but paint sample analysis undertaken as a part of the conservation work found the palette to be very typical of the c17th – making the paintings most likely contemporary with the house. My first phase of work on the wall paintings was the stabilisation of the two chimney breast paintings. The plaster on which they were executed had detached and bulged dramatically away from its substrate, and both the plaster and paint layer were at considerable risk of falling. This emergency treatment phase secured the detachment and fixed the most endangered lifting and flaking paint. 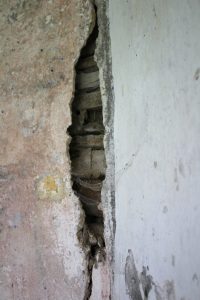 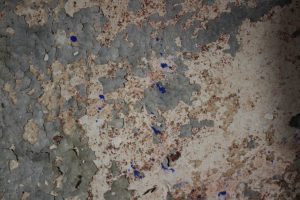 Following the emergency work, the second phase of treatment aimed to address the more in-depth conservation of the paintings, as well as to undertake the conservation of a section of the decorative scheme of frames and grey grounds on the adjoining wall. 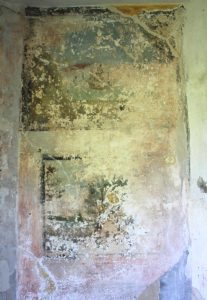 6 The paintings after emergency treatment

The paintings were in fragmentary condition. The seascape had more surviving material, with just over half of the paint surface remaining, the landscape had even less surviving paint. The surfaces of both paintings were covered in dirt, spider webs and a heavy layer of dirty and discoloured wax. The wax was particularly evident on the landscape – where it appeared to have been applied (unfortunately unsuccessfully) to address severe flaking. Wax was found both over areas of loss and in areas where paint loss had occurred after its application. As well as the lost and lifting paint, the surfaces of both paintings had multiple abrasions, cracks and small losses within the plaster. 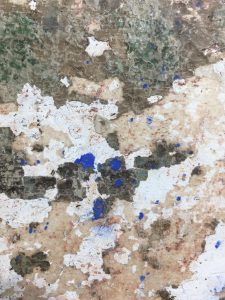 7 The wax coating, showing the losses that occured despite its application

The conservation work involved surface cleaning, to reduce the dirt and dust, as well as solvent cleaning to reduce the wax coatings, as possible, and the more ingrained dirt, which obscured details and reading of the paintings. Further fixing of the paint layer was also undertaken as necessary. Lime plaster was used to repair cracks and holes within the plaster to secure vulnerable edges. The repairs and areas of loss within the paintings were then reintegrated – to help the paintings read as a whole without the distraction of new repair plasters and the white losses of missing paint, which had previously given the impression of viewing the paintings through a snowstorm. No elements within the painting were recreated or detail added, but by toning the losses, elements and details became much more evident. In the seascape in particular, many previously unreadable details became clearer– a for example a large flag at the front of the ship, and charming details of masts and small pennants. 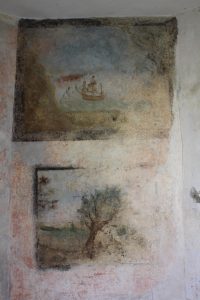 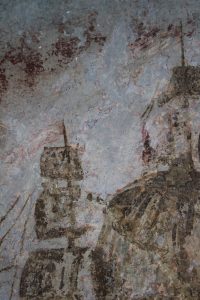 8 -11  The wall paintings after conservation, and details of the ship in the seascape 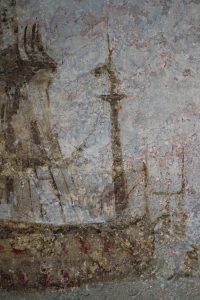 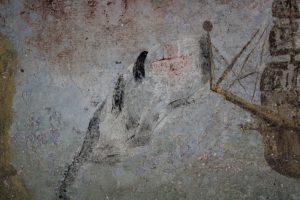 The grey and black frames scheme was extremely powdery and fragmentary. It had several covering limewash layers, which had partially detached, exposing parts of the scheme and often pulling part of the decoration away with it as it lifted and fell. The plaster substrate was largely sound, due to previous repairs. Conservation involved securing the substrate as necessary, by grouting with a lime-based grout. Repairs to cracks and holes and vulnerable edges were made with lime plaster, and the paint layer was secured, uncovered was undertaken as possible, to reveal the scheme from beneath the covering limewash layers. For the final presentation, new repairs were toned with tinted limewashes and a limited reintegration of small losses within the revealed scheme was undertaken to reduce visual distraction and allow the scheme to ‘read’ as a whole. 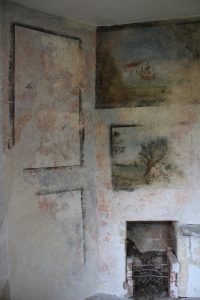 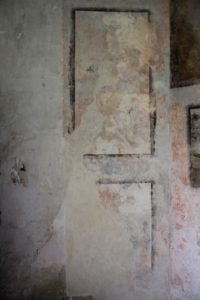