I have just completed a phase of conservation work at Magdalen College Oxford’s historic Dining Hall. I was asked to undertake the conservation treatment of three historically fascinating areas of C16th carved and painted panelling set within the wooden linenfold panelling which lines the Hall’s walls.

These areas of polychrome carvings depict a range of subjects related both to the historic period and the College. The largest block of carved decoration, made up of three sections of panels at the High Table end of the Hall show, centrally, the figure of Henry VIII, which is slightly odd as the date 1581 is carved into two of the panels in the section, dating them to some 40 years after his death and to the reign of Elizabeth I. The Henry VIII portrait is surrounded by Biblical scenes, the Royal Coat of arms and Prince of Wales feathers. 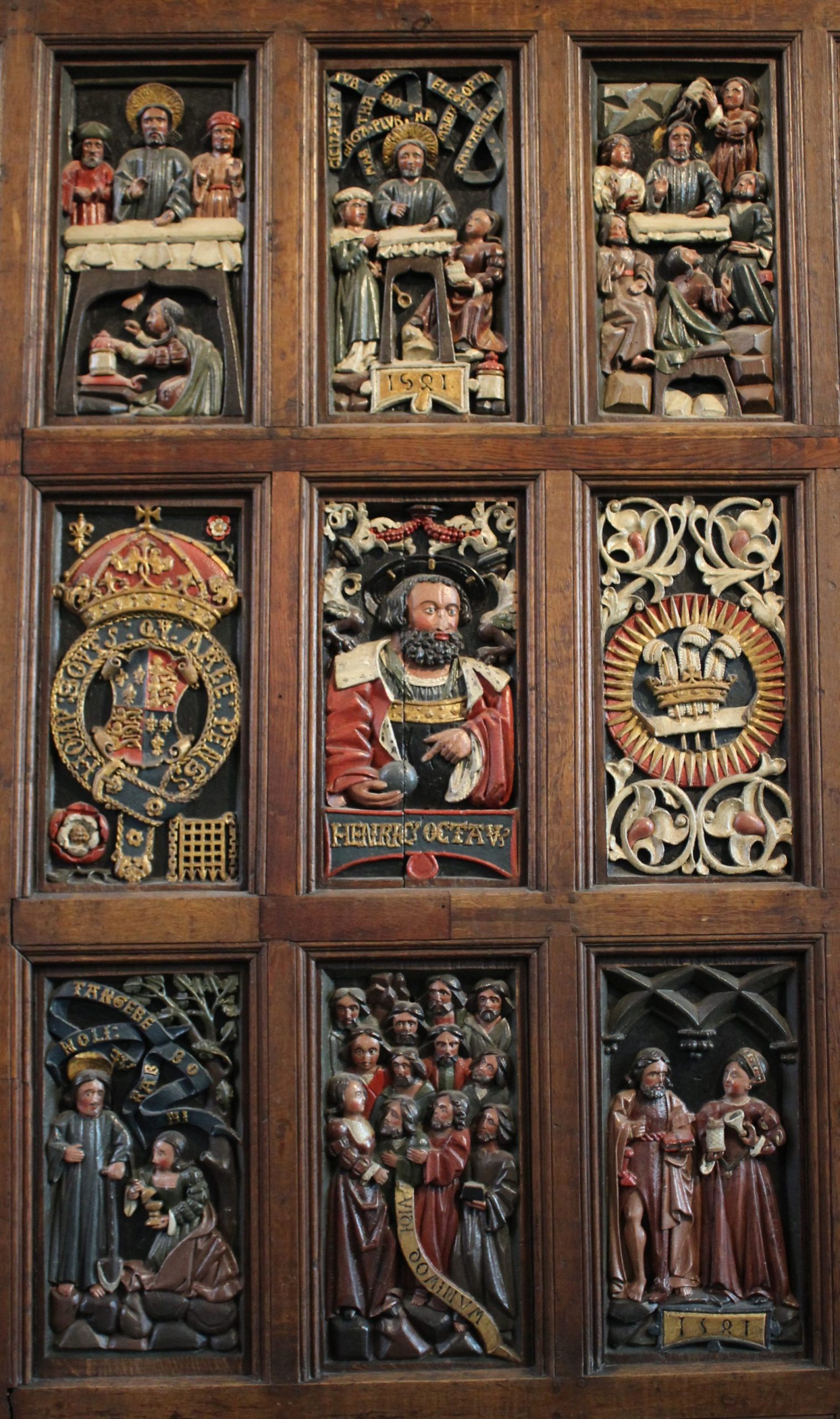 To the left and right of the Henry VIII panels are two blocks showing the four continents of the world, as divided by 16th Europeans: Europe, Africa, America, and Asia. Each continent is represented by a portrait head set in a roundel. Above the portrait heads are a series of shields, representing the College, College founder (William Waynfleet) and, interestingly, as was discovered by archival research for this project, the coat of arms of the Earl of Arundel. There appears to have been a close connection between William Waynflete and the Earl of Arundel, one of Magdalen’s key medieval properties Aynho Hospital in Northamptonshire was acquired from the Earl 1483, and his coat of arms is also found at the opposing end of the Hall. 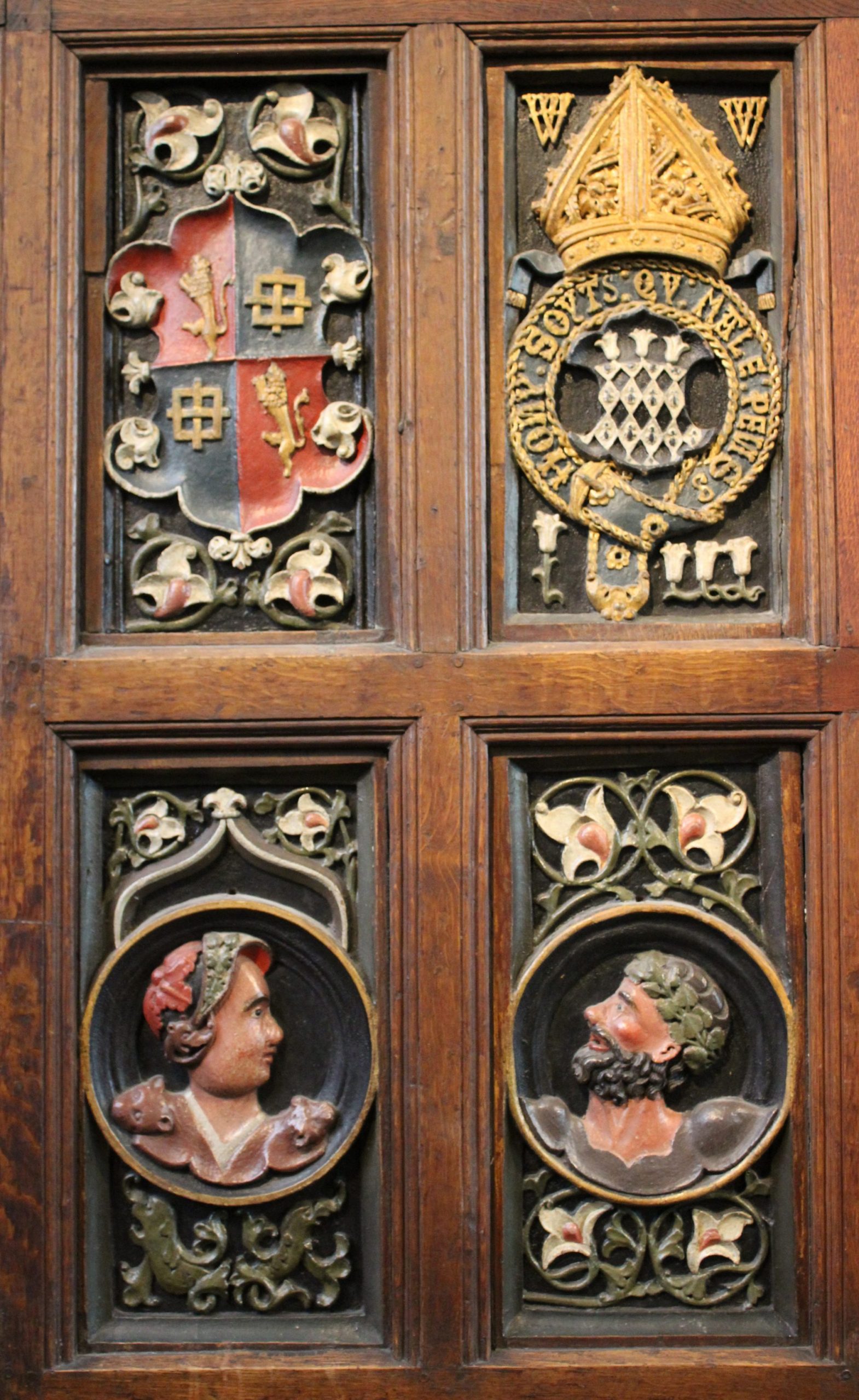 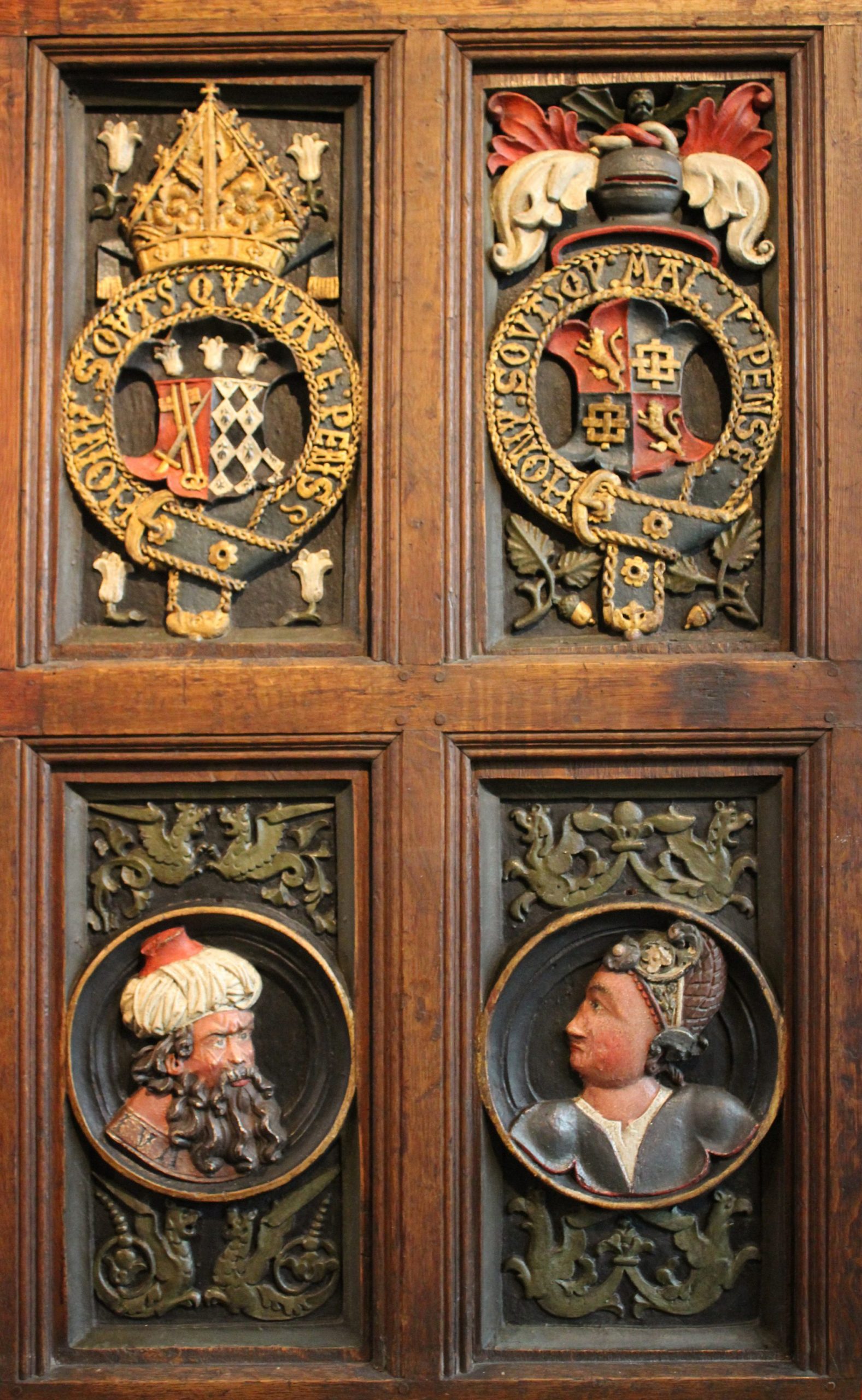 Above these central carved and decorated sections, and running along the top of the linenfold panelling, is a carved and polychromed frieze in the grotesque style, typical of the time, showing mixed animal, human, and plant forms. 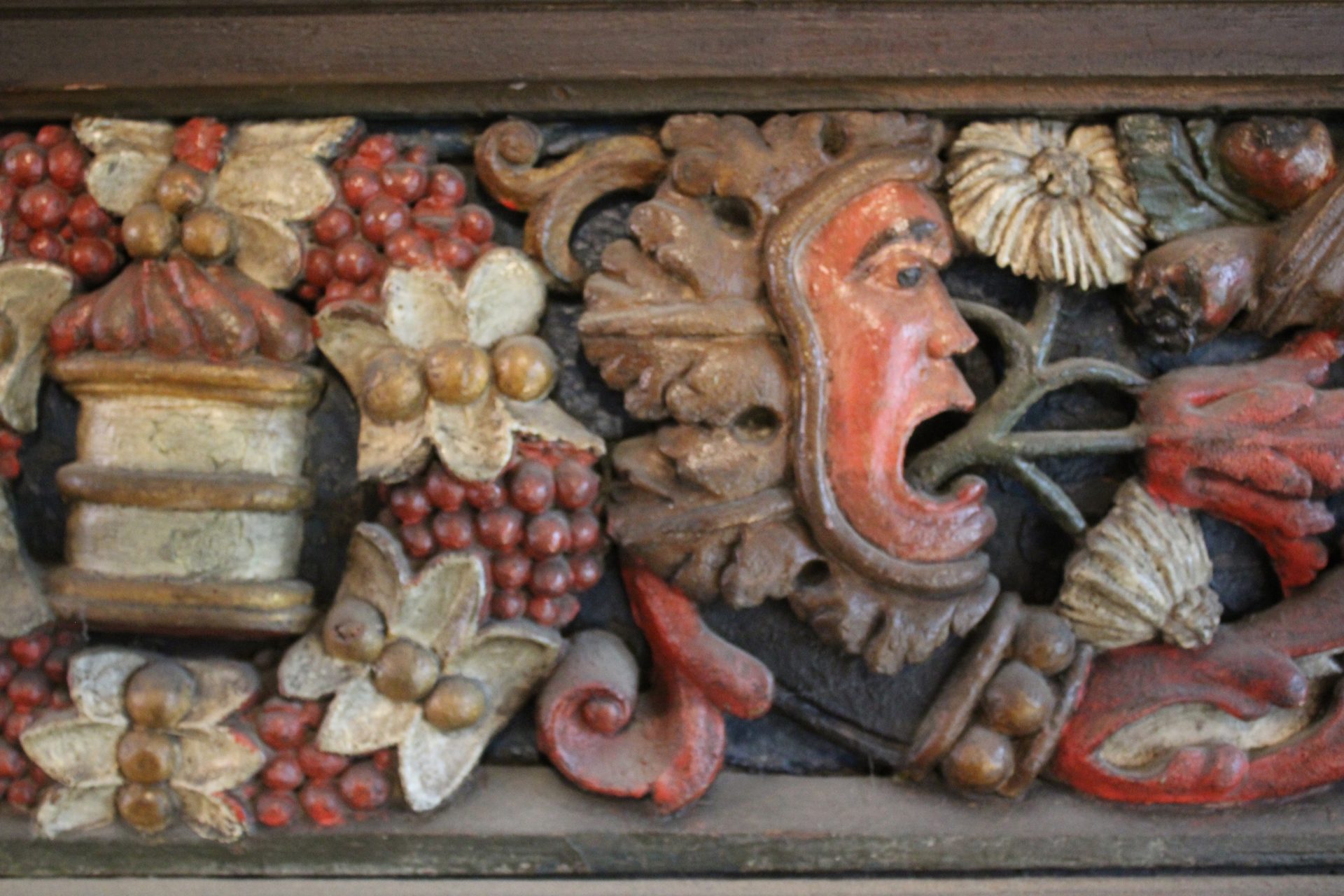 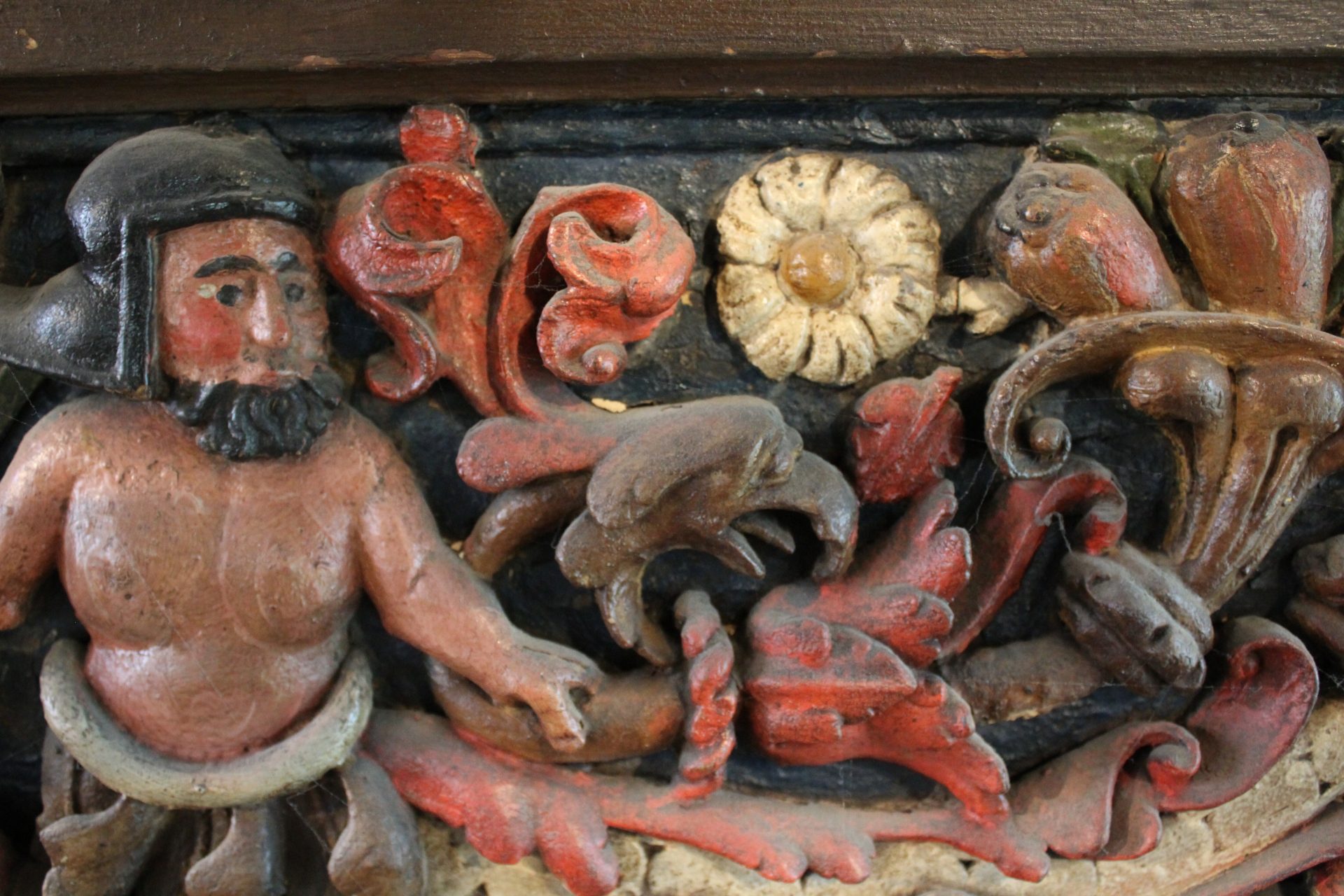 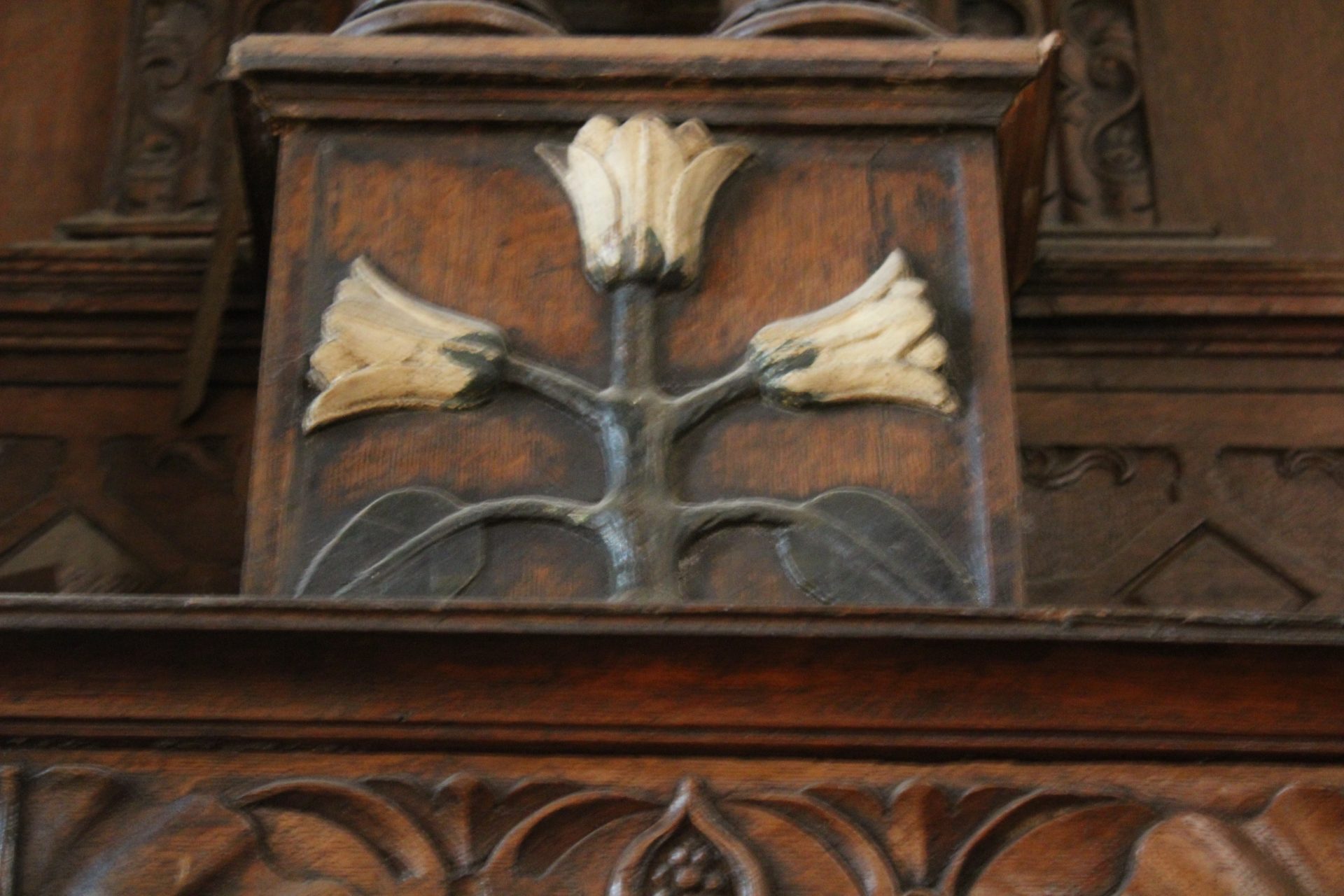 Before undertaking any conservation work analysis of the paint layers was carried out. The aim was to establish how many layers were present, if an original layer was surviving and if possible obtain a rough dating of the various layers found. To this end, I took a series of micro-samples across all the different coloured elements of the carvings. These were examined in cross-section under magnification and then dispersed and the pigments examined under a polarizing light microscope. The results found the original paint scheme in almost all of the samples, and showed at least four layers of repainting. These could be dated approximately, according to the pigments found, finding the first repaint to date from the c17th and the most recent to pre Second World War. Generally speaking, the analysis found that the repaints had more or less followed the same decorative scheme as the original.

A brown tinted varnish was found in many areas over the top paint layer. Despite its darkening effect there was not felt to be a strong enough conservation justification for its removal, other than aesthetic. This conservation work ran parallel to the installation of new lighting system in the Hall, therefore varnish removal was not attempted before examining the areas under the new more sympathetic lighting, which could be used to selectively brighten the most effected darkened areas.

A heavy dirt and dust layer covered the painted surface, which was not only visual disturbing but also potentially harmful, with the risk of it becoming ingrained and etching into the decorative surfaces. This dirt layer was particularly heavy on the least accessible area of the carvings – the frieze. 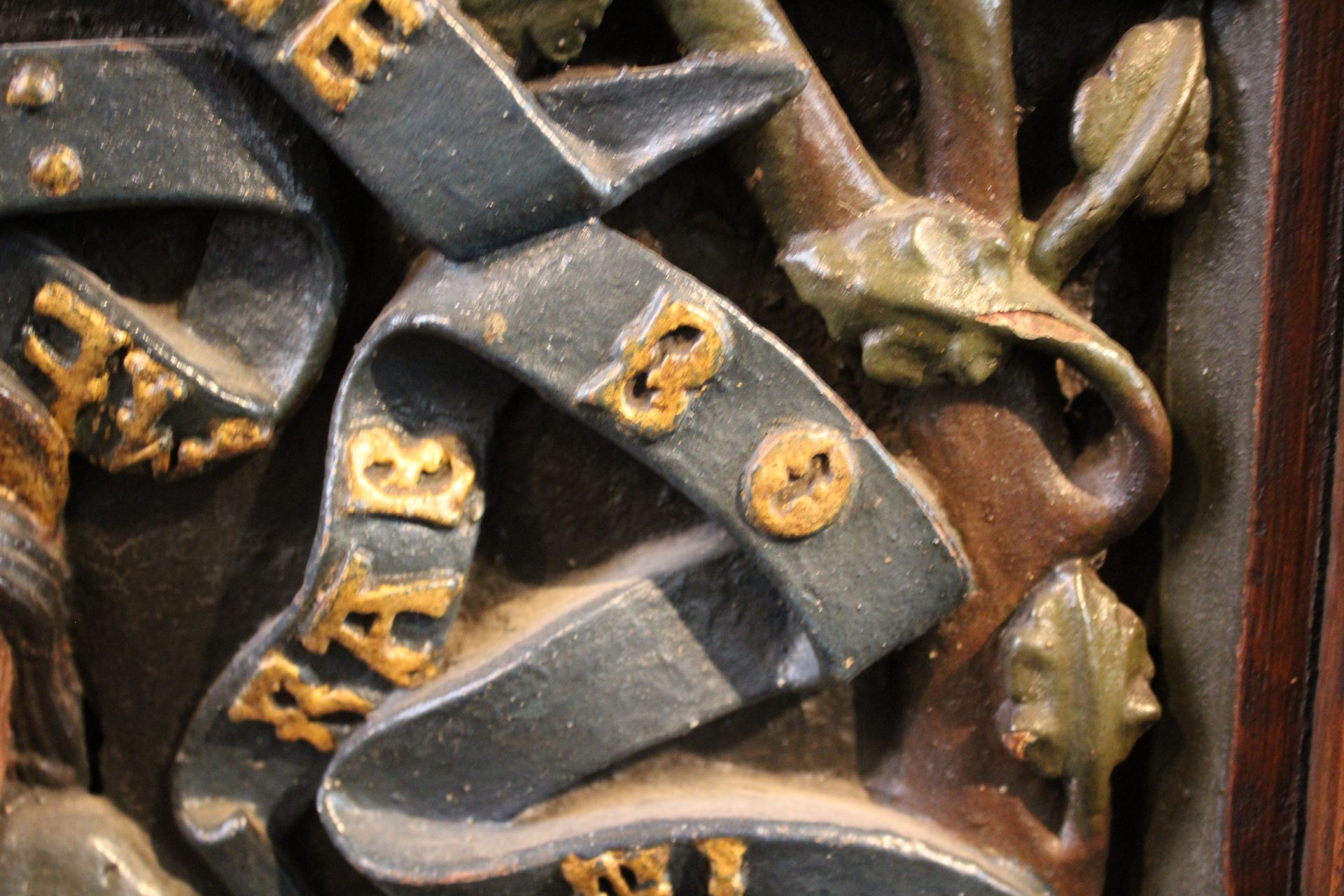 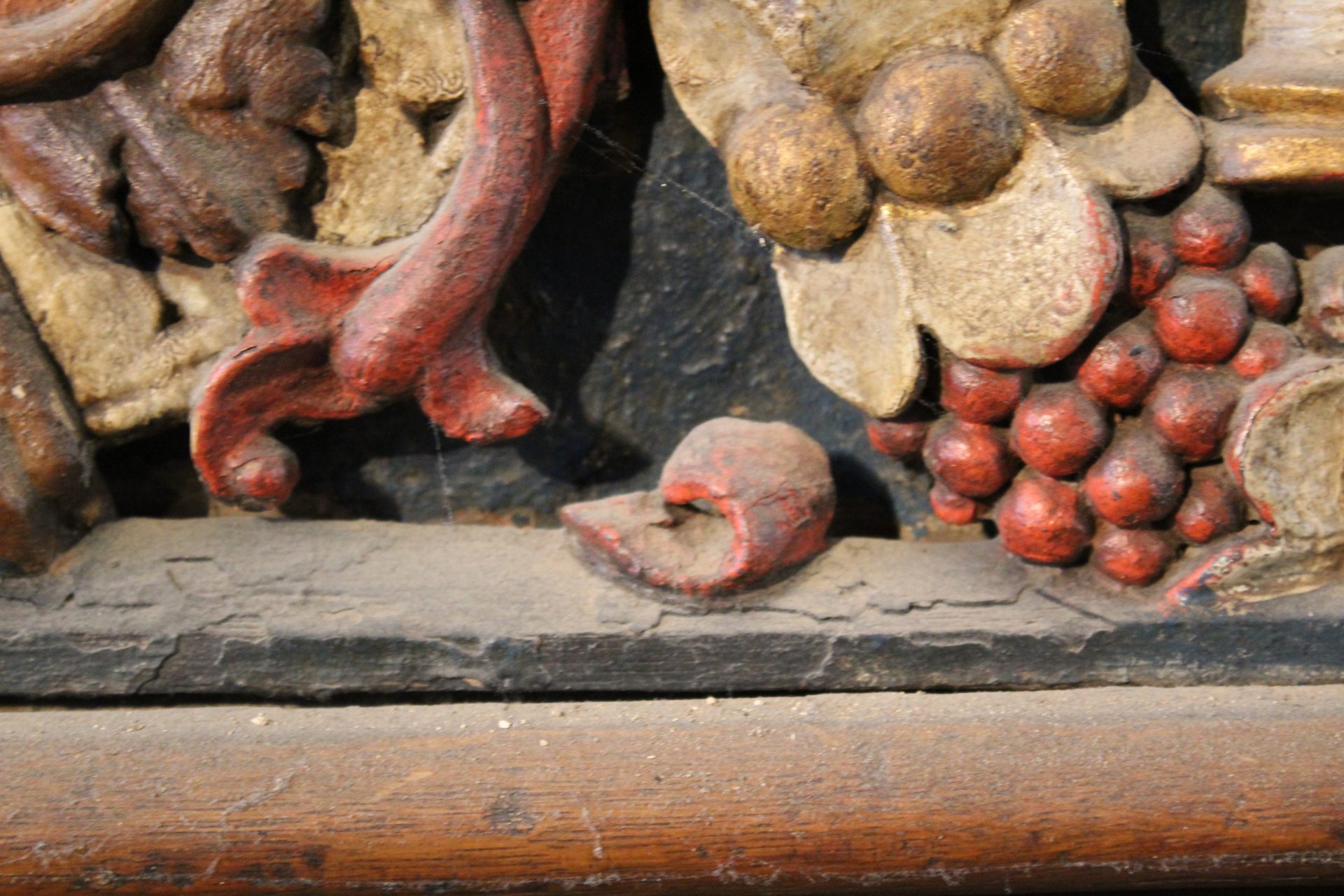 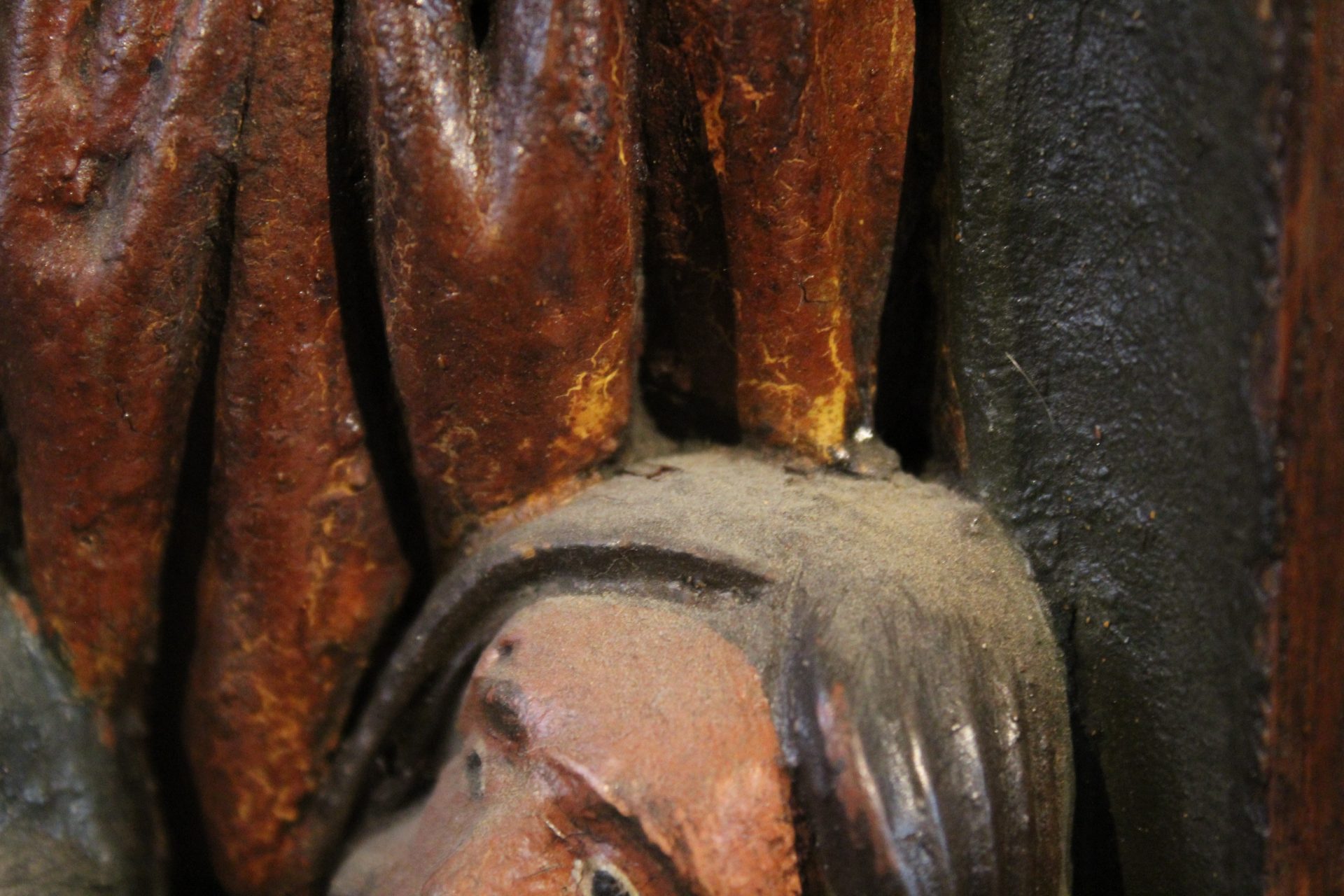 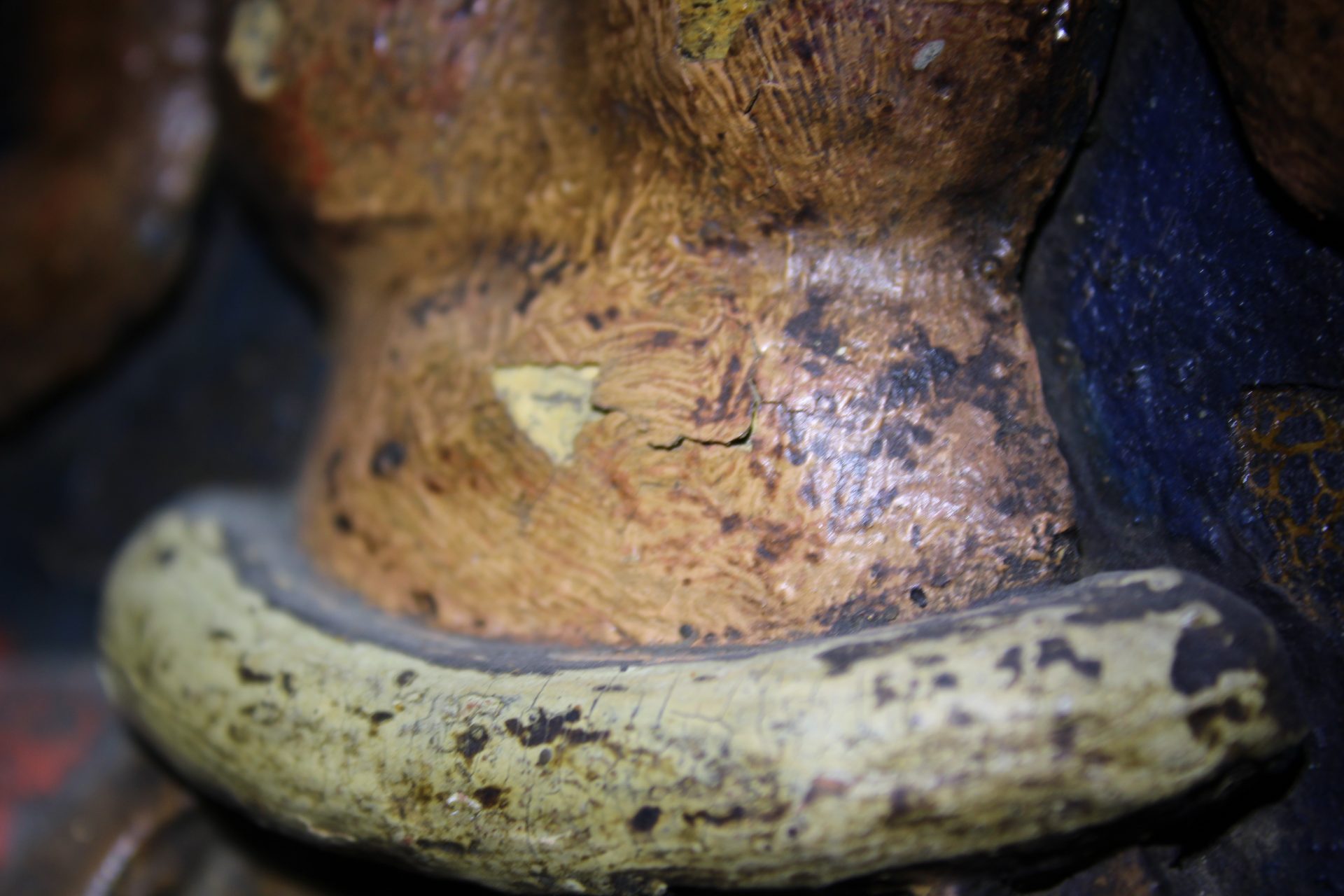 In addition to the dirt layer, the paint layers were lifting and flaking in a number of areas. Again this was most pronounced on the frieze, but also occurred on the panelling below – most distractingly across several of the faces.  Some of the flaking was clearly historic and had lifted again after previous retouching. 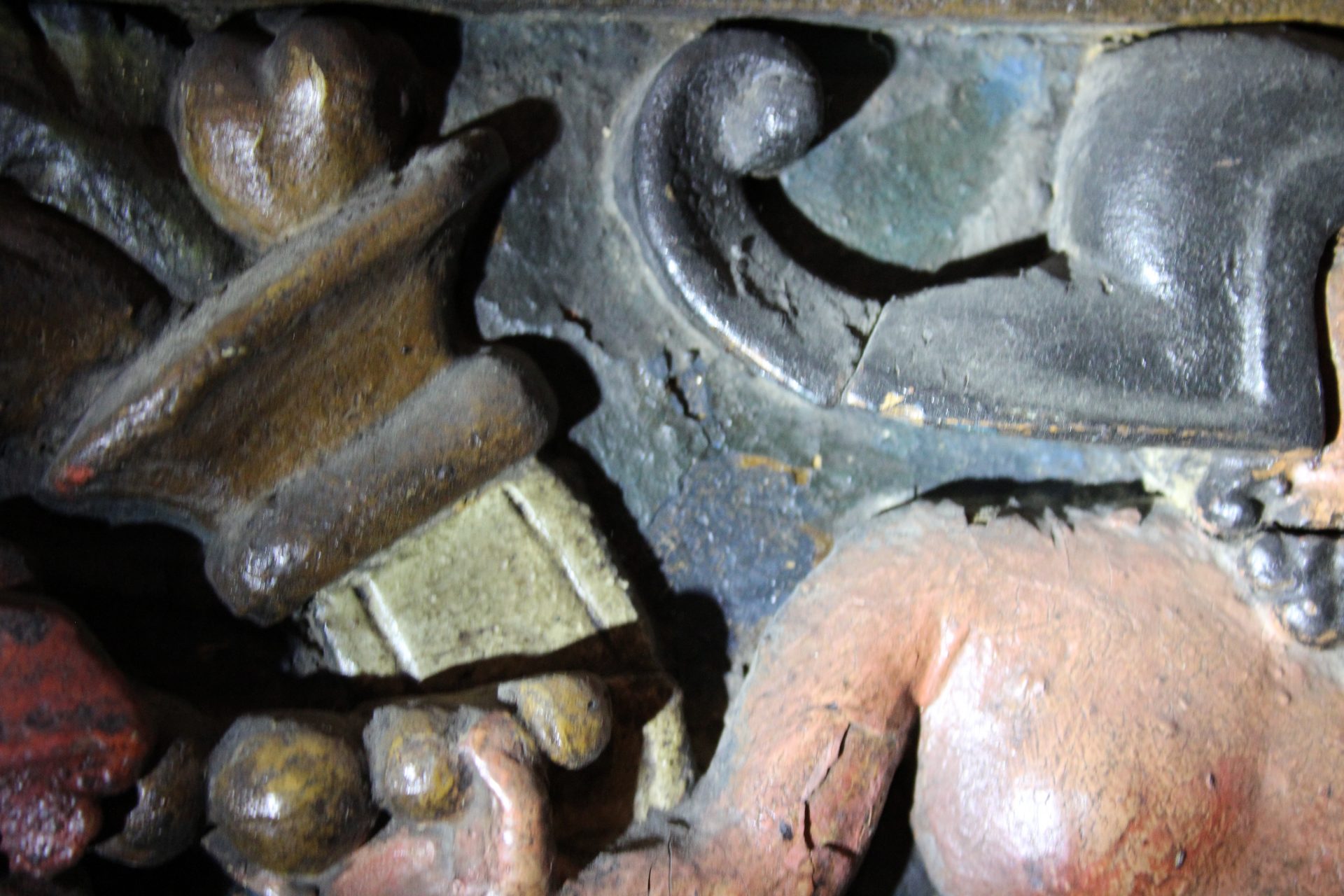 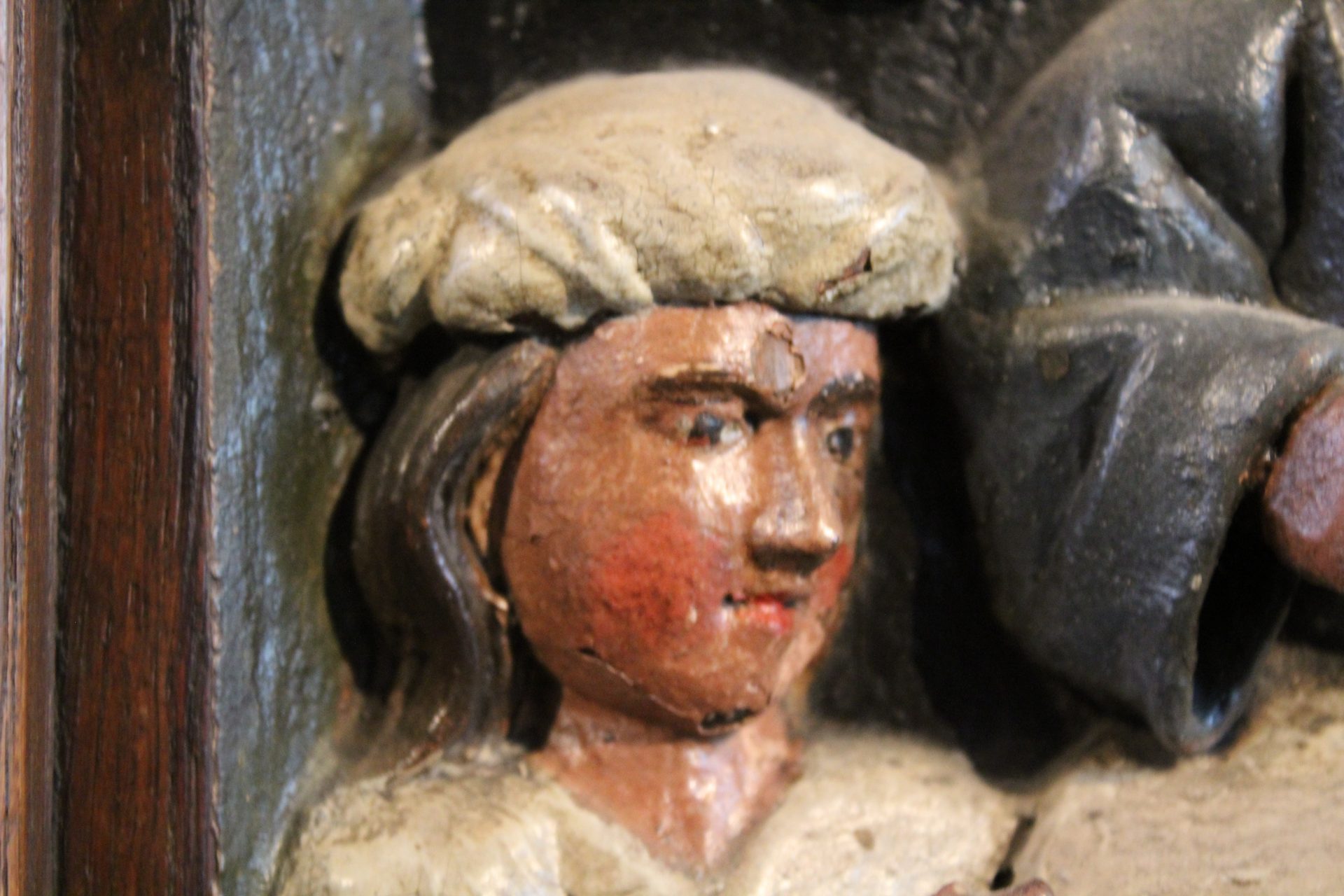 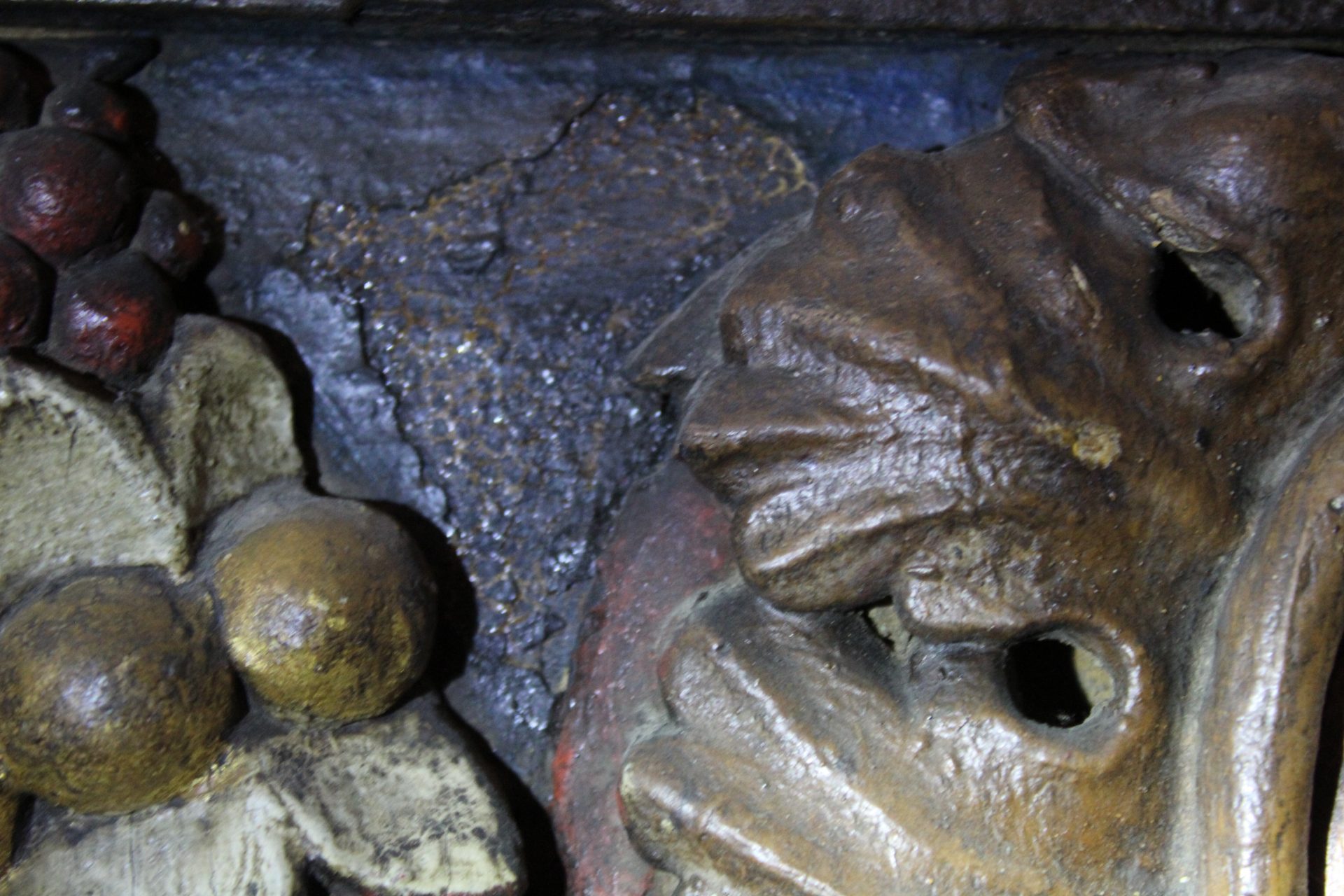 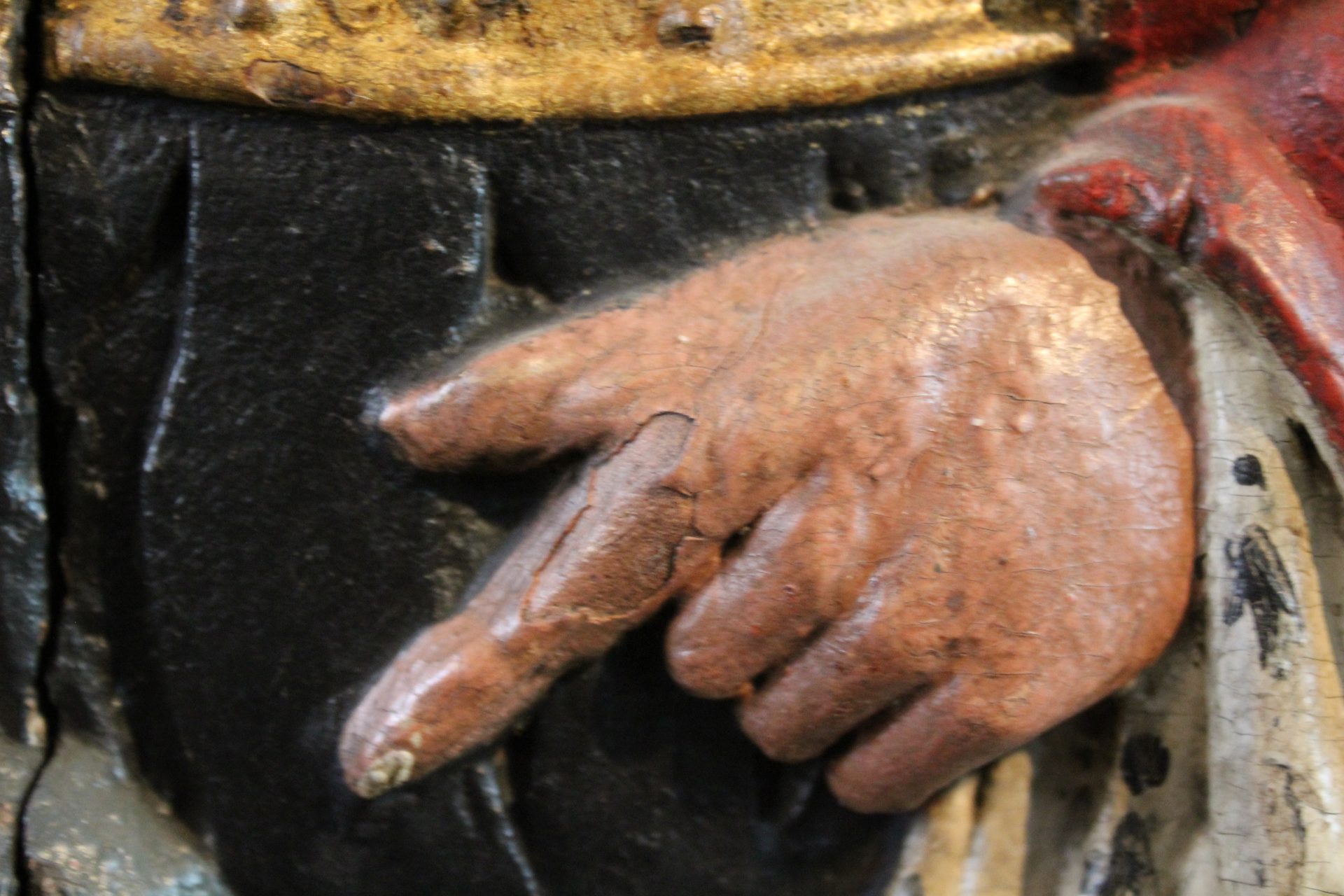 The conservation treatment sought to address these two problems. A light surface clean of all painted surfaces was untaken using dry cleaning methods followed by flake fixing and, where necessary, ironing back with a heated spatula to readhere the flakes into their correct position. This treatment has not only visually improved the reading of the panelling by removing the veil of dirt, it has also reduced the risk of damage by the dirt layer etching into the paint surface, while securing the paint layer and so avoiding both risk of loss and visual disruption. 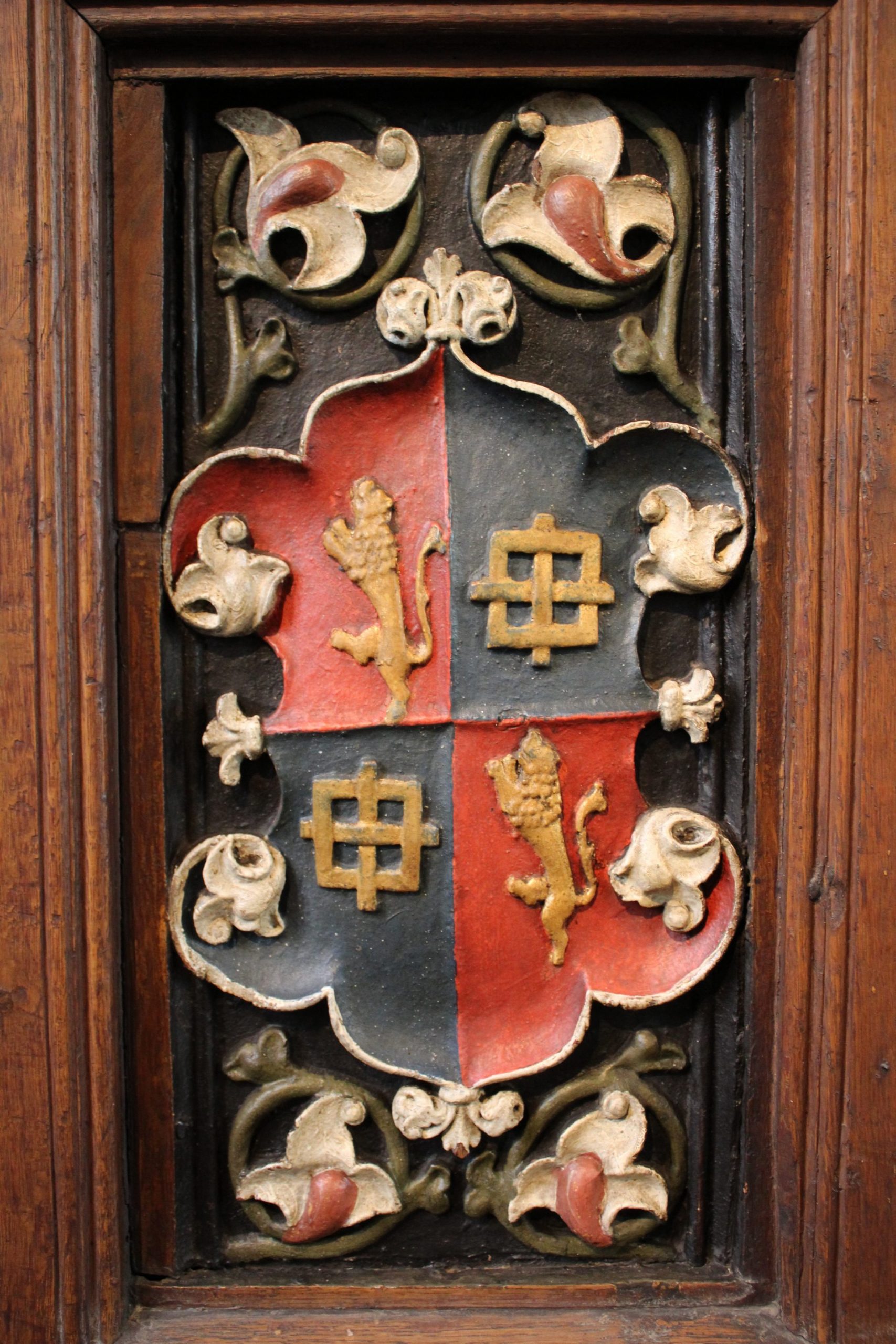 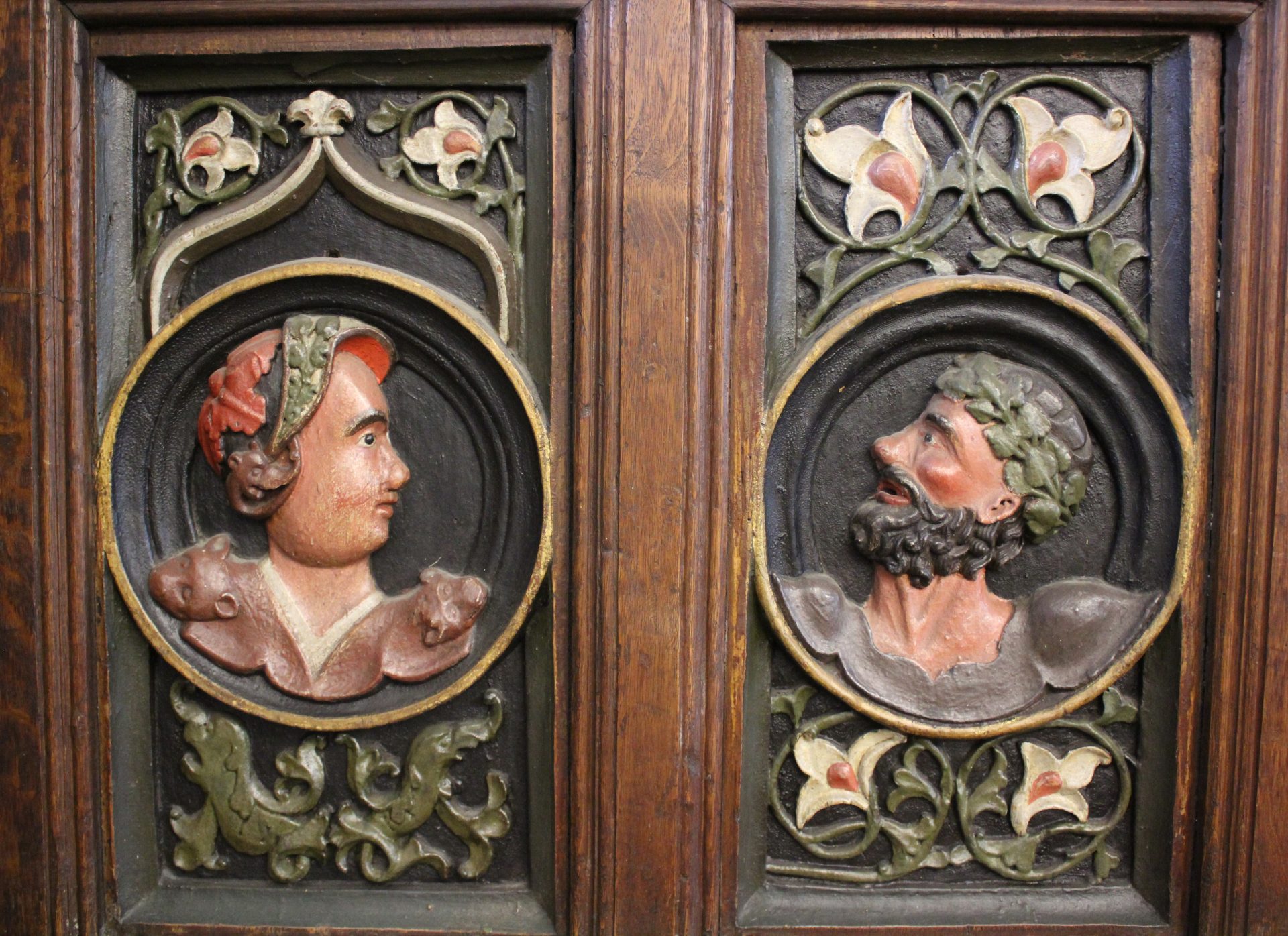 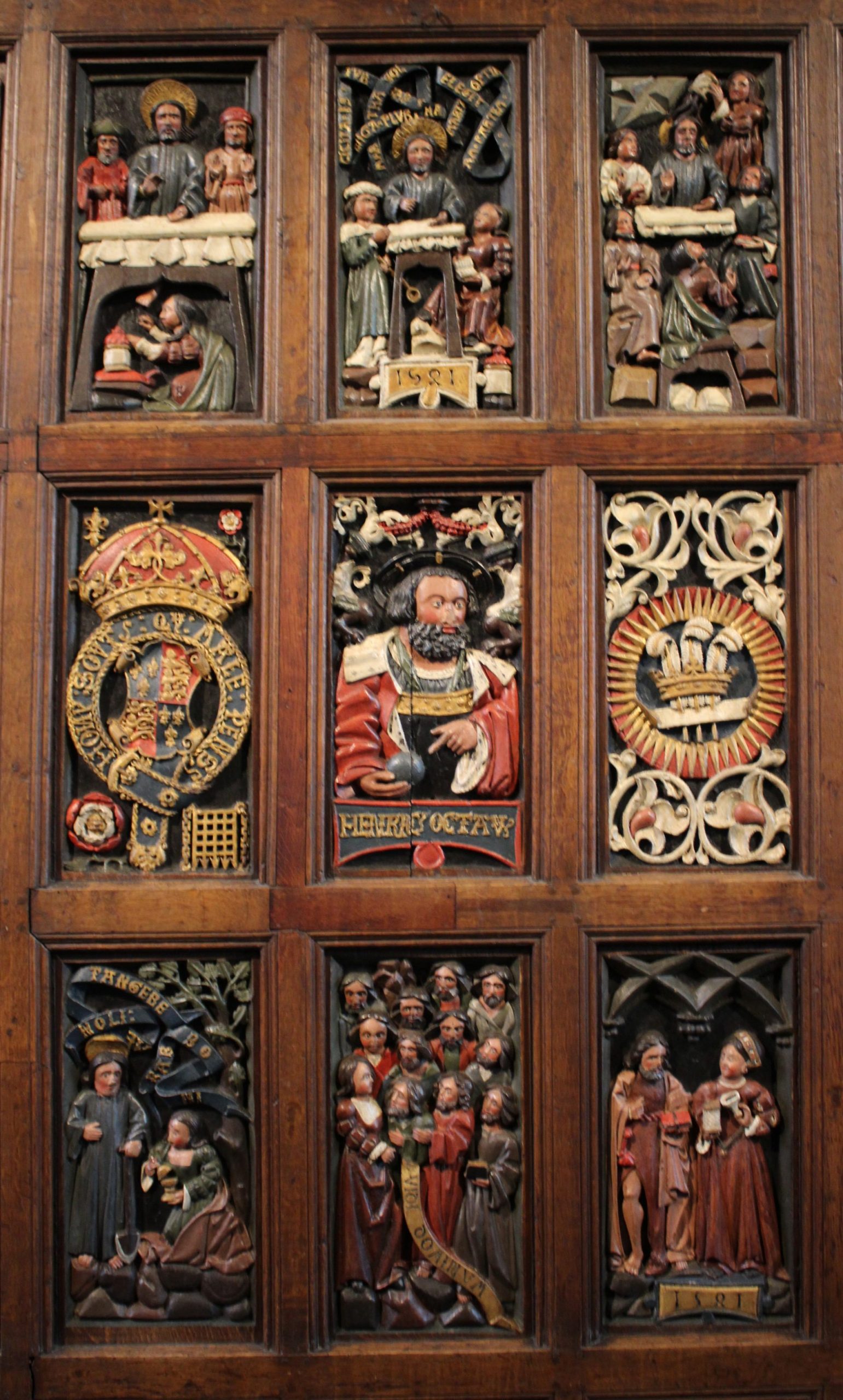 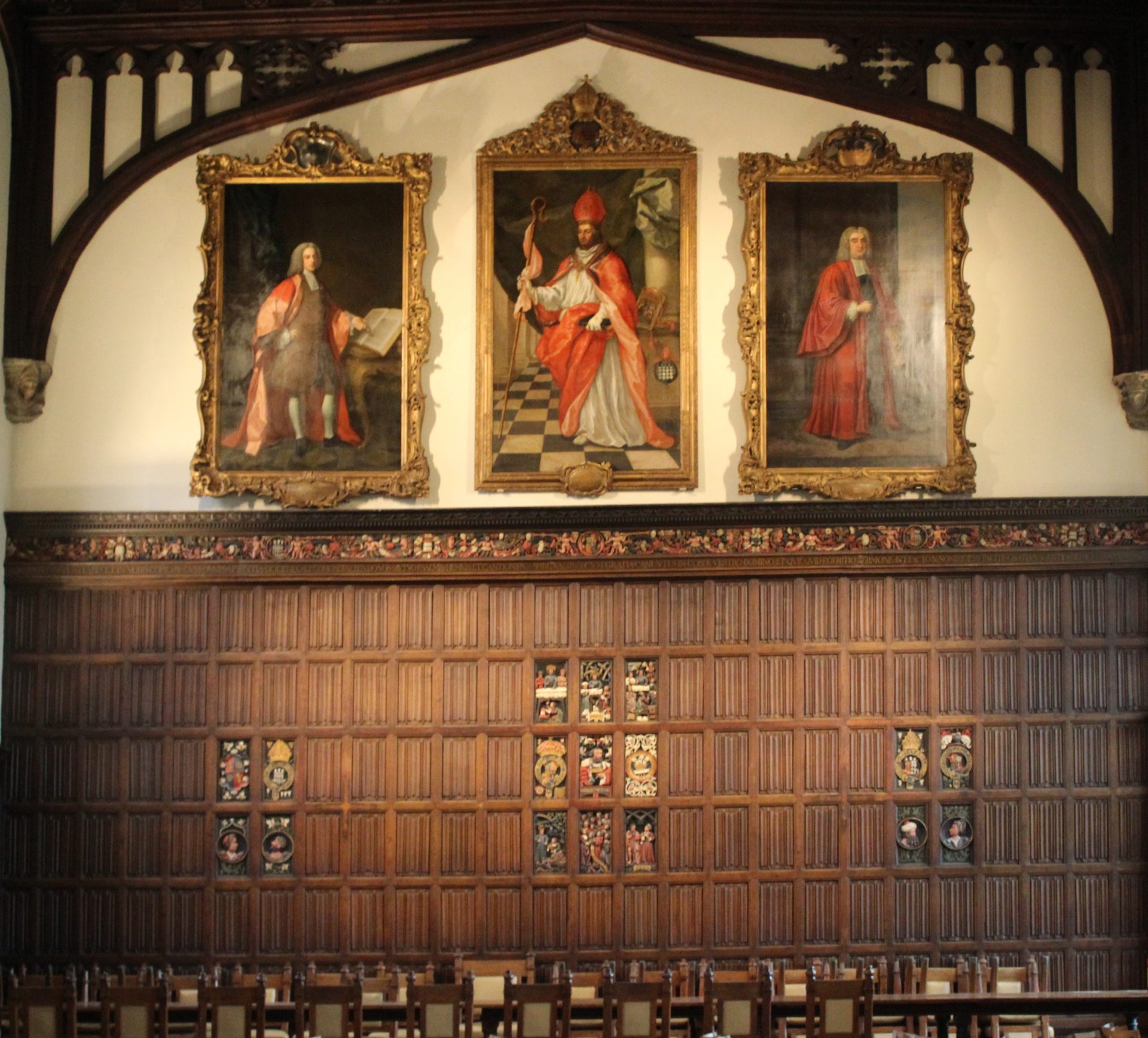 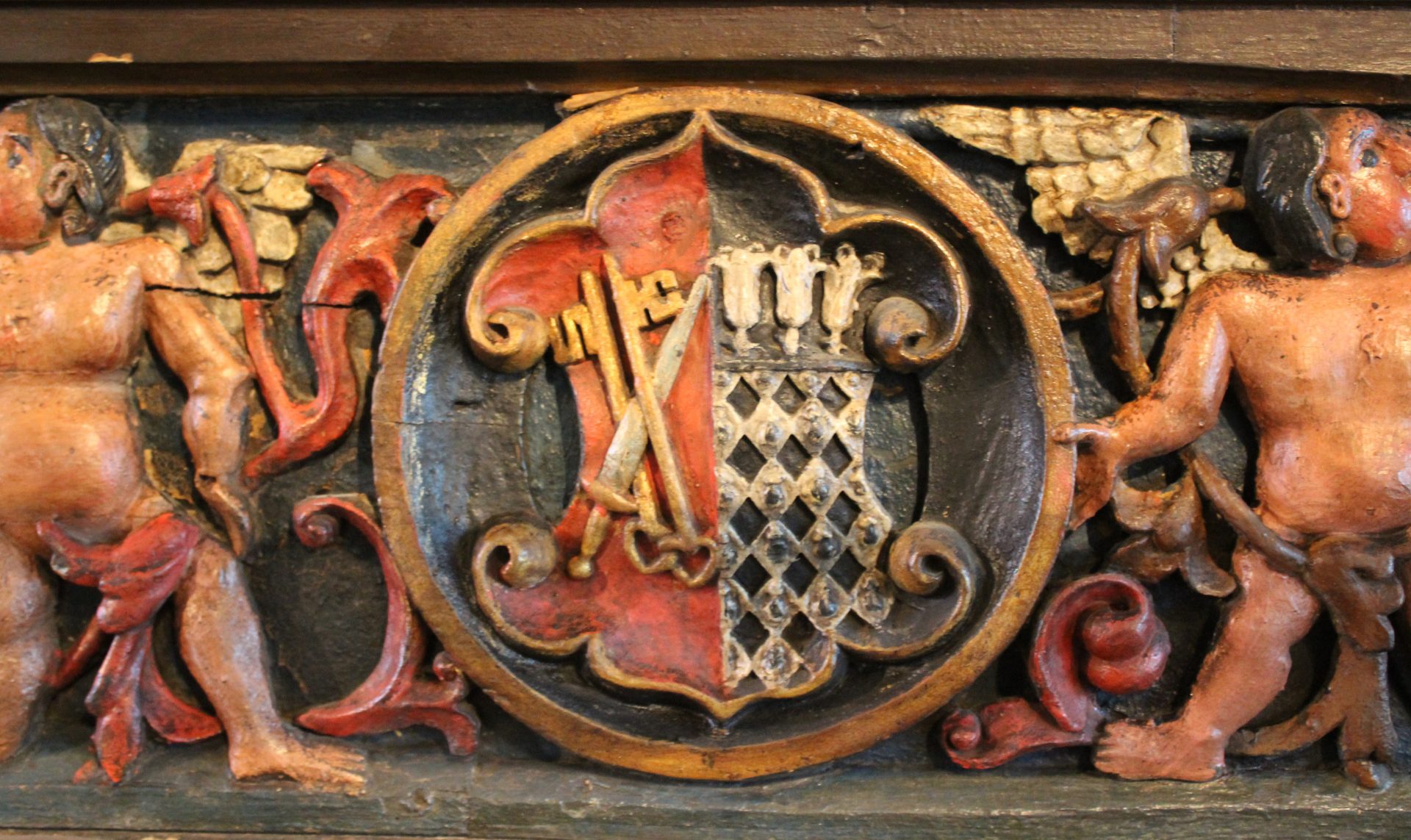 The new lighting also significantly improved the presentation of the polychrome areas, in particular, it was used to pick out the Magdalen lilies at the entrance end of the Hall, where the lighting lifted the appearance of the dark varnish meaning no solvent based removal was necessary. 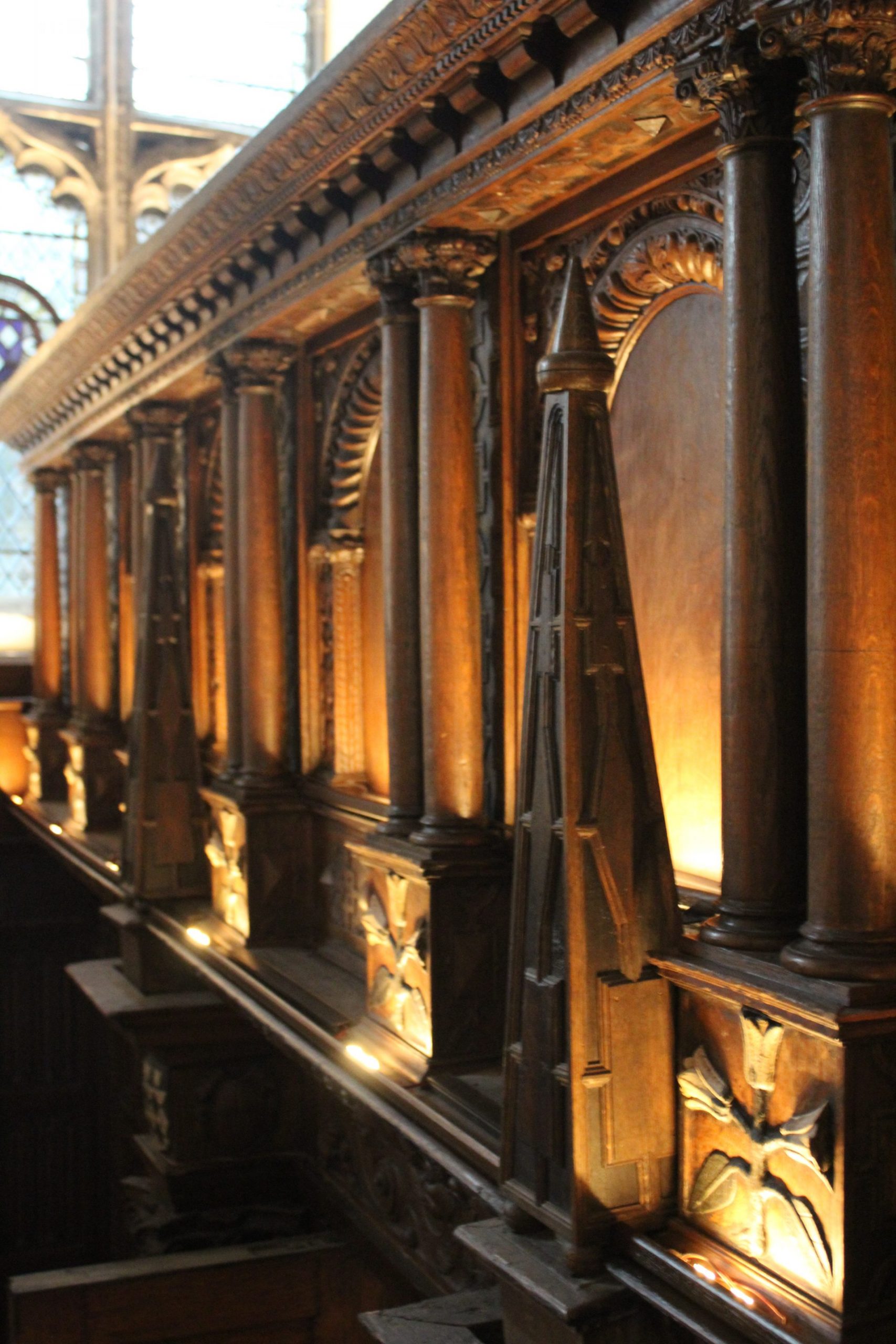 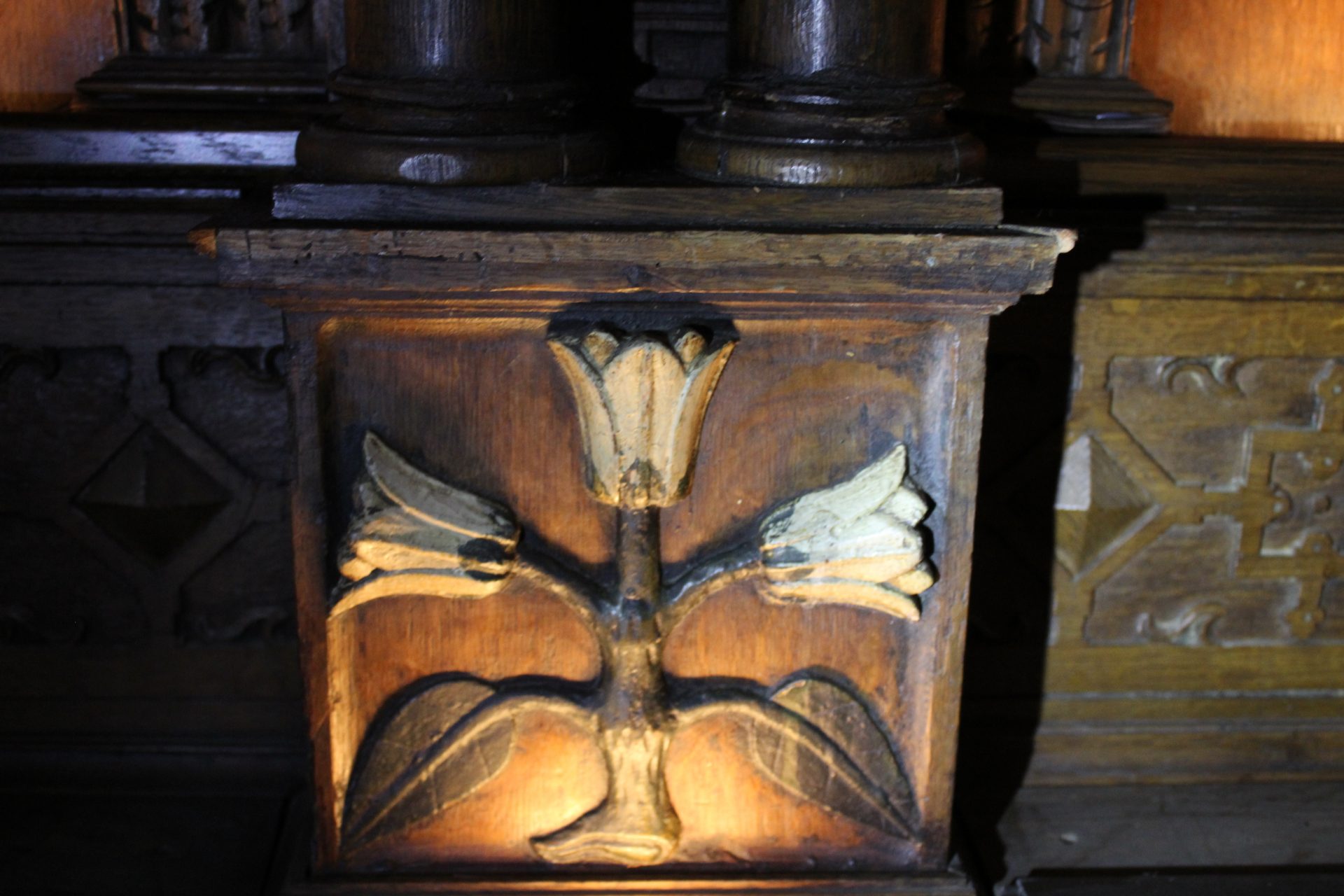