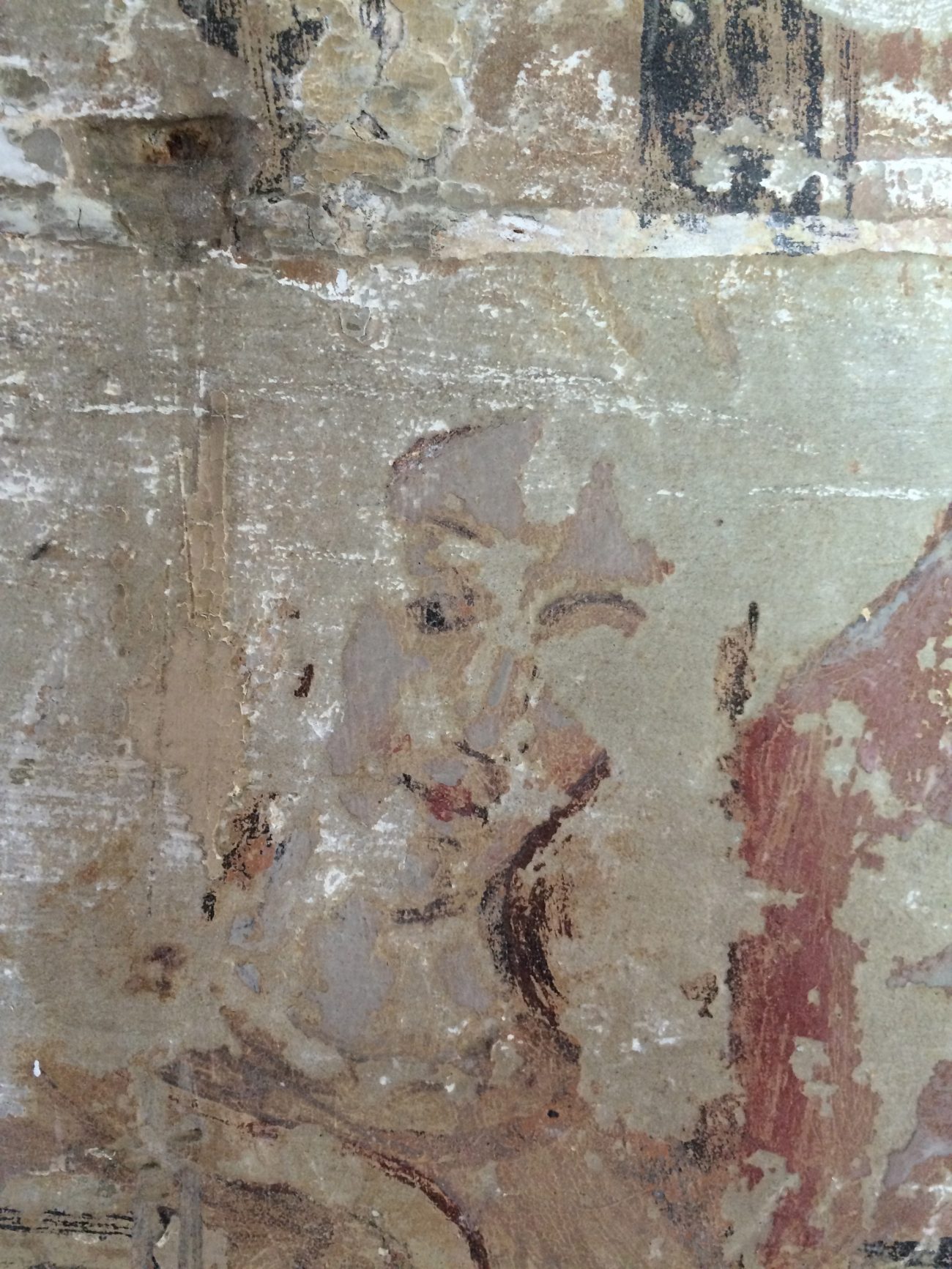 Doom, Medieval paintings and Shakespeare at the Guild Chapel Stratford

Posted by Bianca Madden Dec 06, 2016 Comments Off on Doom, Medieval paintings and Shakespeare at the Guild Chapel Stratford News, Work 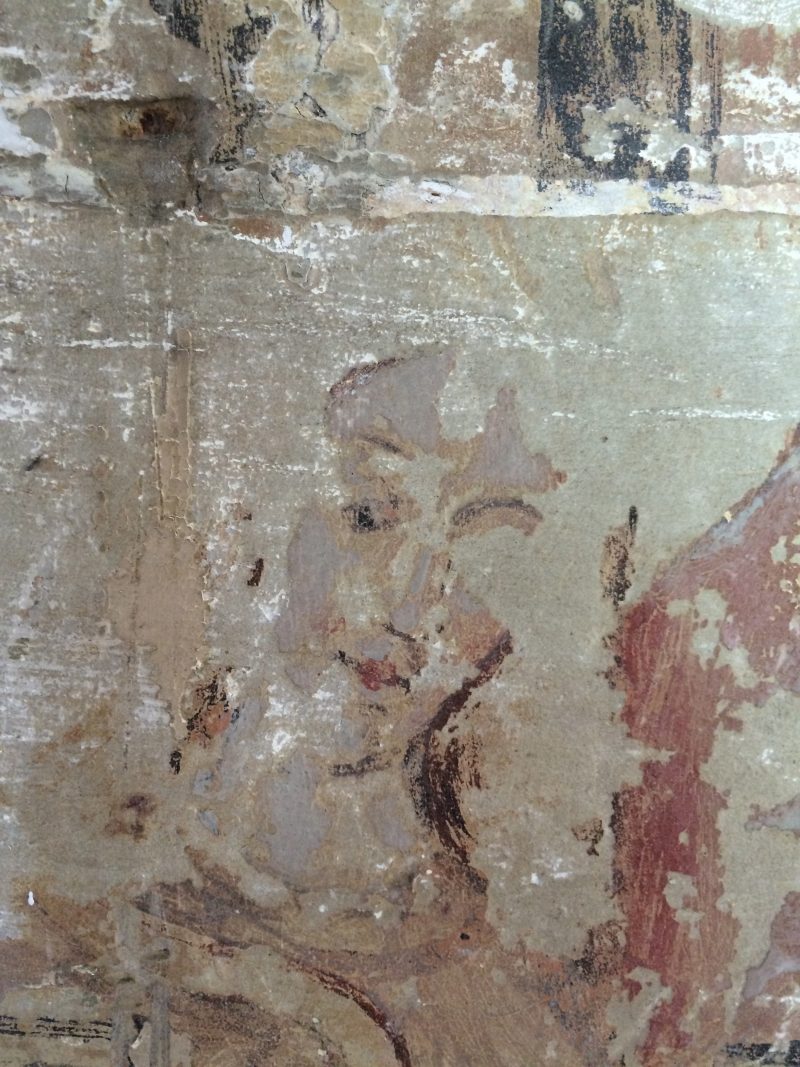 This autumn I have been involved in the wall paintings conservation project in the historic Stratford on Avon Guild Chapel for the Perry Lithgow Partnership.  This follows on from the project at the adjoining Guildhall earlier this year https://www.biancamadden.com/wall-painting-conservation-for-shakespeares-anniversary/ and is linked to the 400 year anniversary of Shakespeare’s death.

The chapel – a rare surviving purpose built medieval Guild chapel – had a unique and very fine collection of late medieval wall paintings, thought to date from the late 15th or early 16th century.  The collection included a large Doom over the chancel arch, a Dance of Death series, a life of Adam, and a Holy Cross cycle. These paintings are recorded as having been ‘defaced or limewashed’ in 1563 under the supervision of John Shakespeare (William Shakespeare’s father – chamberlain of the Corporation of Stratford at that time).  The paintings remained in damaged condition, undergoing further damage in the 19th century with those in the nave later covered over under wooden panelling in the mid 20th century.

This project concentrated on the conservation of the very finely painted ‘Erth upon Erth’ scene on the west wall of the nave – previously hidden behind panelling, and on the large Doom.  The Doom had been uncovered previously, and treated in the 1920s, where, as was common at the time, it was treated with a thick wax coating, applied as a protection and to enhance colours, but had resulted in a thick discoloured wax layer, which obscured detail and attracted further dirt.  The paintings were also marred by scraping, and the loss of paint surfaces – the majority of the flesh colours of the figures was lost, as well as a lot of detail, while multiple residues of limewash remained on the surface, making the painting very hard to ‘read’.

The project sought to reduce the heavy wax coating, remove remaining limewash, to stabilise any flaking paint, to repair vulnerable areas with lime plaster repairs, and to sympathetically reintegrate losses to reduce their distracting effects, without recreating missing elements.  The painting is now secure and readable, despite the large areas of loss.  Areas of surviving fine detail, the flowers in the backgrounds, details of architecture on the Heaven side of the painting and of devils on the Hell side, cannot be adequately appreciated from the ground but good photographs and interpretation at ground level are planned now the conservation work is completed, allowing the viewer the chance to enjoy the painting more fully.

The very top of the painting is lost from view, cut off  by a later ceiling this lowered ceiling cuts horizontally across the central figure of Christ, losing the upper part of his figure, and areas of surrounding sky that would have included angels.  Investigation into the roof space above revealed the well preserved heads of angels still surviving, but the majority of the surface is still obscured by the covering limewash layers.

Below is an overall photo of the Doom after conservation, courtesy of Richard Lithgow, some details  during the conservation work, and bottom right, the head of an angel preserved in the roof space above. 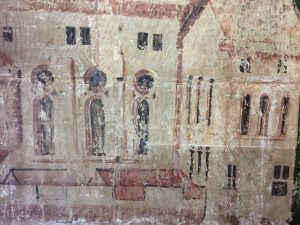 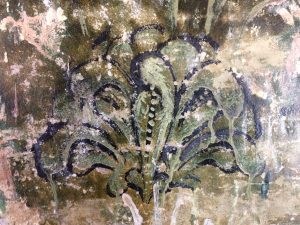 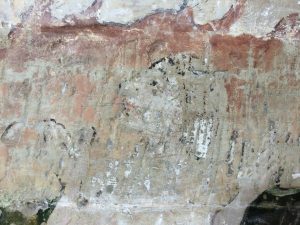 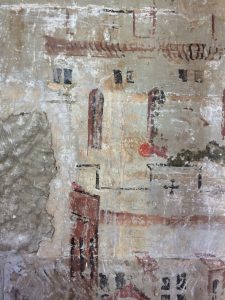 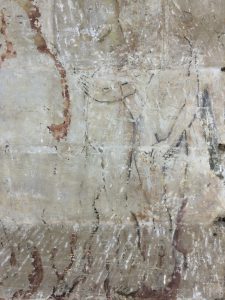 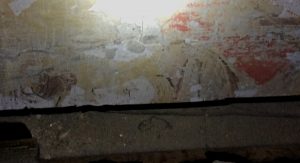 And here is some of the press coverage from the project:

And a piece about another Doom conservation project in Oxfordshire last year. https://www.biancamadden.com/in-search-of-a-doom/