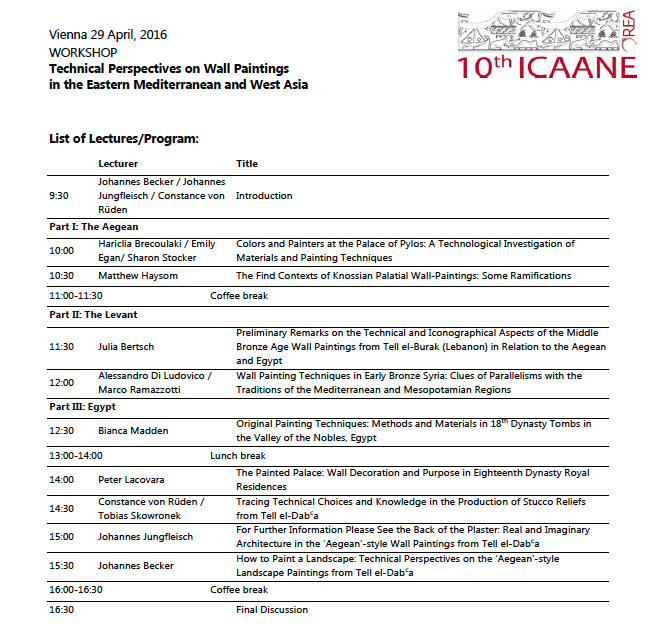 Posted by Bianca Madden May 08, 2016 Comments Off on Technical Perspectives on Wall Paintings News, Work

Last week, 25-29 April, was the 10th ICAANE conference, held at the Austrian Academy of Sciences in Vienna.  ICAANE (International Congress on the Archaeology of the Ancient Near East) is a conference cycle organised by archaeologists from various European universities and hosted every other year at a different European university.

The conference is huge and diverse, with a five day programme of lectures in seven different venues at the Academy of Sciences themed across subjects such as the archaeology of Religion and Rituals, Economy and Society, Excavations Reports and Summaries.  It included a day of lectures on Cultural Heritage Under Threat, with speakers covering: the current situation in Syria, Lebanon, Turkey, Libya and Tunisa; safeguarding and digital archiving;  damage assessment and monitoring in Iraq and Syria; and illicit trafficking.  The full programme for the conference and more details can be found here: 10th ICAANE.

Alongside the lectures was a series of workshops.  On Friday 29th I attended the workshop on Technical Perspectives on Wall Paintings in the Eastern Mediterranean and West Asia, organised by Johannes Becker, Johannes Jungfleisch and Constance von Rueden from the Ruhr University, Bochum.  The purpose of the workshop was to provide insights into the various technical approaches and the underlying knowledge in the different wall painting traditions of the Eastern Mediterranean and West Asia from a conservation, scientific and archaeological perspective.

I spoke about the original painting techniques, methods and materials in 18th dynasty tomb paintings from the Valley of the Nobles in Thebes – drawing on the experience at the tombs of Sennefer (see the blog post: Conservation at the Tomb of Sennefer), and Amenemope with the Belgian Archaeological Mission in the Theban Necropolis by the Université libre de Bruxelles and the University of Liège, and in particular referencing the research undertaken by my colleague Hugues Tavier using close visual analysis, and experimental archaeology and reconstructions to attempt to understand working methods and materials.  The talk also covered the projects at the tombs of Menna (Conservation of a Painted Tomb and The Tomb of Menna), and Neferrenpet with the American Research Centre in Egypt where archaeometric analysis of the paintings was carried out in addition to more traditional techniques.

It was extremely valuable to learn about the research carried out by other projects on wall paintings with different conventions across the region.  The work of the organising team of the workshop, on the wall paintings at Tel el’Dab’a ‘Aegean Design in Oriental Palaces’ , was particularly interesting, as the team followed a very similar approach to the analysis of the paintings to that used at the Belgian project.

It was a fascinating and productive workshop, and was very valuable to share experience with colleagues working across the region – from The Aeagan, the Levant as well as the other projects in Egypt.  Later in the year ICAANE  will publish the papers presented at workshop for a wider audience beyond those who attended the conference.